For the uninitiated, the chaos of Saigon’s streets can be intimidating to the point of paralysis. The first time I had to cross the road, I stood still on the curb for minutes, with my hands held in front of me like a mime hitting a glass wall. I’m not even sure I blinked. My mind was stuck in a panicked loop of “Now! No… now! No… now! No…” but my body (instinctively wiser) refused to obey its orders. 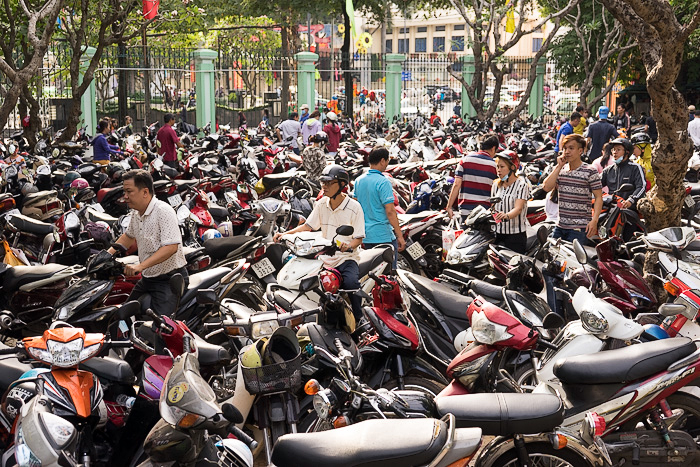 Traffic in Saigon is insane. Seriously, go to a busy intersection at around 5pm, and find an upper-story cafe from which to watch the madness of an infinite mass of cars and motorbikes turning and merging into each other, without slowing down or looking in the rear-view mirror. To turn right: barrel into the intersection full-speed ahead, and don’t think about the possibility of being crushed by that oncoming truck. To turn left: slowly advance, until the number of your left-turning comrades hits some sort of critical mass — and now you guys have the advantage. Go, everyone! They can’t kill you all!

As a pedestrian, you’re going to have to forget all the traffic safety lessons which have been drilled into you since the first grade. They are worthless in Saigon. For example: here, you’re going to have willfully walk into oncoming traffic. It’s just something you’ll have to do. As motorbikes whiz past you left and right, you’re going to have to cross the street, and hope that everyone else wants to avoid an accident as much as you do. Because you’ll have no say in the matter; your life will be in the hands of dozens of speeding Vietnamese strangers. You either accept that risk, or remain on the wrong side of the street.

But aren’t there traffic lights? Well, yes, there are! But they don’t function quite the same as traffic lights in the west. The green-yellow-red system is identical, but the colors mean different things. Green, of course, means “go”. But yellow also means “go”. And red? That means “go”. As long as the drivers are part of a big enough herd, and there’s not a bigger herd cutting them off, they’ll just continue moving.

A frequent piece of advice about crossing the street, which we’ve heard from a few Saigon “pros”, is to continue walking slowly and steadily, and not even look around. Needless to say, this is terrible advice. Yes, you’re going to have to be brave, and yes, steady progression is basically the right idea. But if you don’t look around and decide carefully about when to advance, you’ll be ground meat. Trucks and buses simply go too fast to dodge pedestrians. I’m pretty sure taxis don’t care who they kill. And while motorbikes will weave, you can’t just step blindly in front of one.

Until you’re comfortable, a better strategy is the “Human Shield”. Find a local (better yet, a group of locals), and stick behind them. I’ll forever be thankful to the bent old woman who helped me across my first street. I don’t think she even saw me sneaking along beside her, or felt me clutching her skirt.

Now that we’ve completed the lesson about walking in Saigon, it’s important to point out: nobody in Saigon walks. Sidewalks are the exclusive province of tourists and motorbikes who can’t be bothered with the traffic on the road. 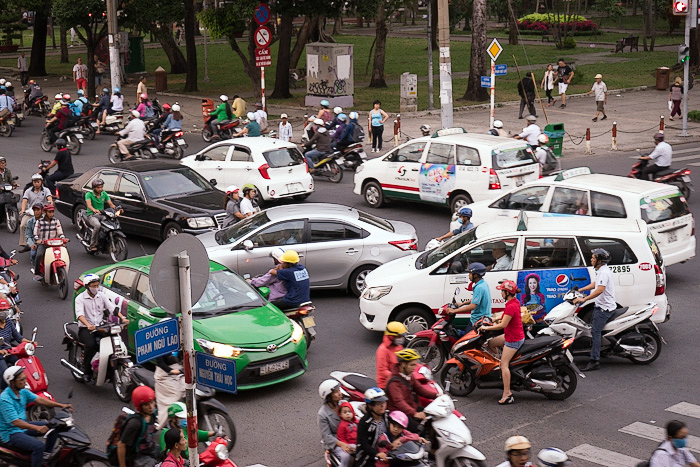 So it shouldn’t come as a surprise to learn that motorbikes are by far the best way to get around Saigon. There’s no subway (yet), and the bus system, while widespread, is confusing and slow. No, you’re going to want to either have a motorbike yourself, or get comfortable with taking motor-taxis.

Finding a motor-taxi on the street is pretty simple — they’re waiting around on nearly every street corner. But if you just wave one down, you’ll have to haggle over the price, and deal with the headache of explaining your destination to someone who likely doesn’t speak much English. Luckily, in this modern, app-empowered age, there’s a much easier option.

Install either Grab or Uber to your phone, and with the touch of a button, call a motorbike to pick you up. The prices are phenomenal, allowing you to cross the city for cents. Grab is the Southeast-Asian variant of Uber, and is more ubiquitous. It’s generally the one we use; Uber is usually a few cents cheaper, but I suspect they’re just trying to price their competition out of the market. And Grab was here first.

It’s amazing how quickly you can get used to blasting through Saigon on the back of a motorbike. The first time my driver blasted through a red light without looking, I squealed in terror. The fifth time, I squealed in delight. The twentieth time, I didn’t even notice.

In fact, now that we’ve been here a few weeks, I’m starting to realize that the city’s “lack of traffic rules” is actually an “advanced set of traffic rules”. It’s like, when you’ve been playing Tetris for a long time, and then realize you can immediately start playing at Level Ten. It’s so much more fun! From now on, playing Level One will seem so slow and boring.

It might be hard to go back home and follow normal traffic rules. Getting around Saigon is exhilarating… when’s the last time I felt that way about commuting? 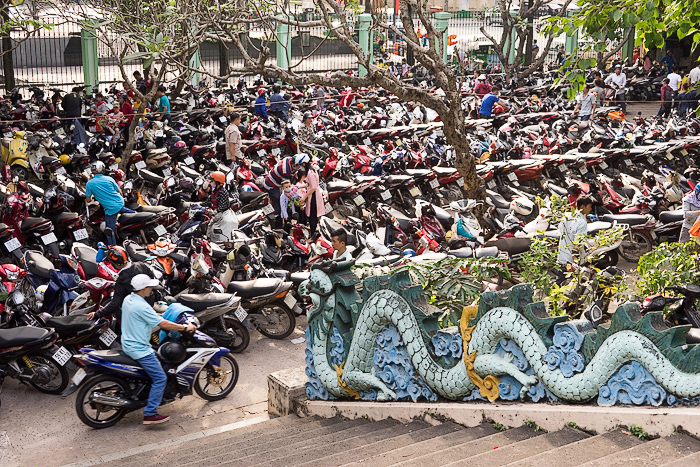 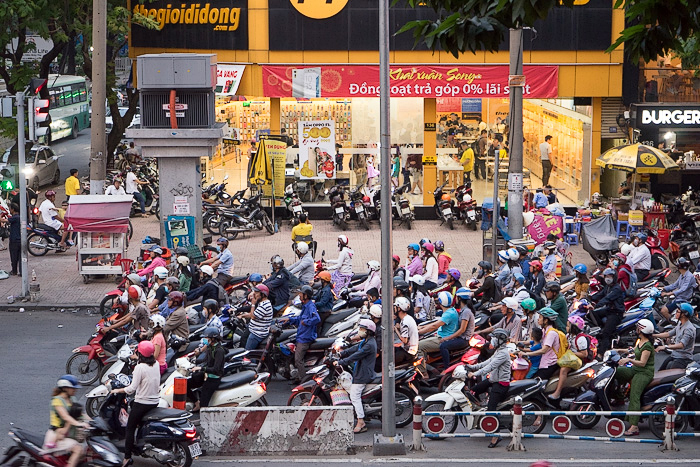 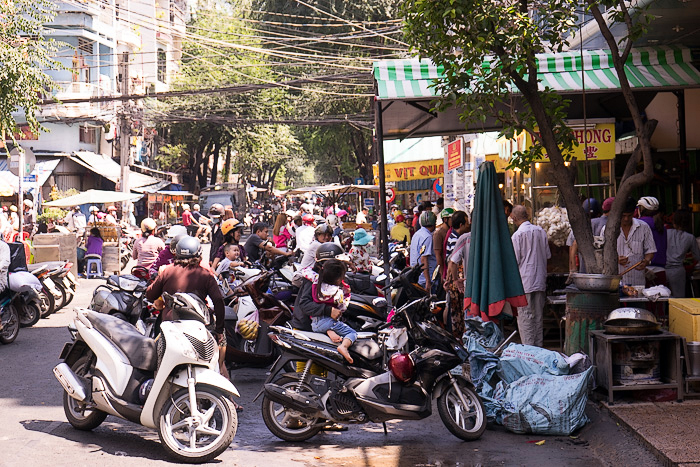 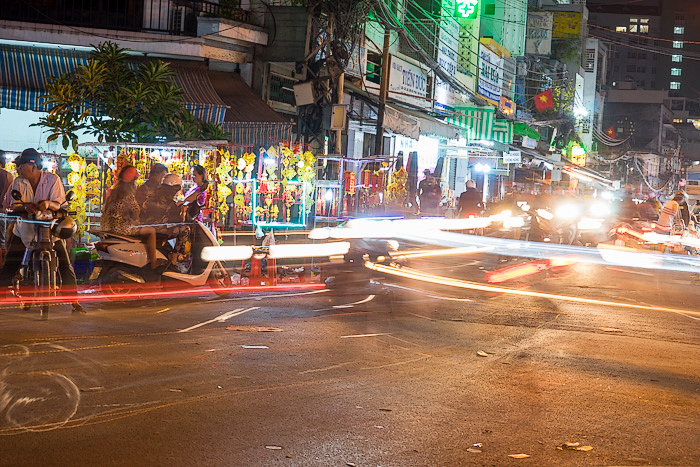 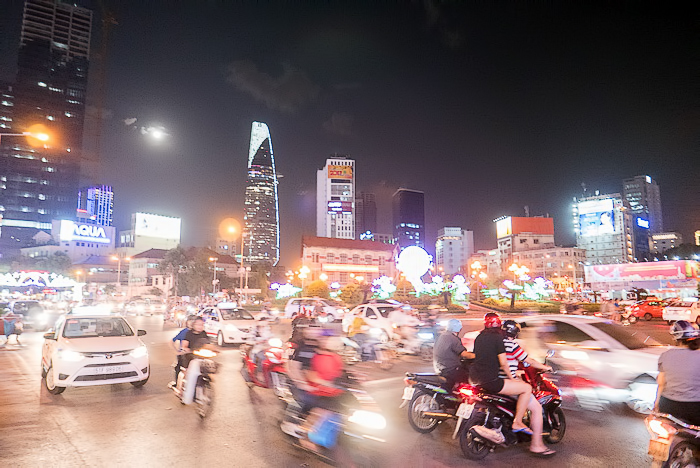 The Imminent Transformation of Thú Thiêm

A Successfully Botched Visit to the Giác Viên Pagoda