Two of Saigon’s most picturesque colonial buildings are found right next to each other, in the center of the city. The Central Post Office (B?u ?i?n) and the Notre-Dame Cathedral were constructed by the French in the late 19th century, and a visit to both is obligatory during any tour of Saigon. 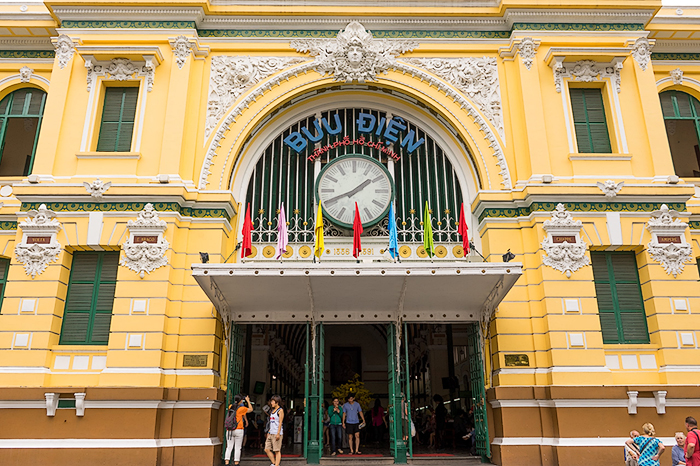 Of the two, we found the Post Office to be the more interesting. Built between 1886 and 1891 by the French architect Marie-Alfred Foulhoux, the building has a magnificent neo-baroque facade, and looks more like a national museum than something as mundane as a post office. 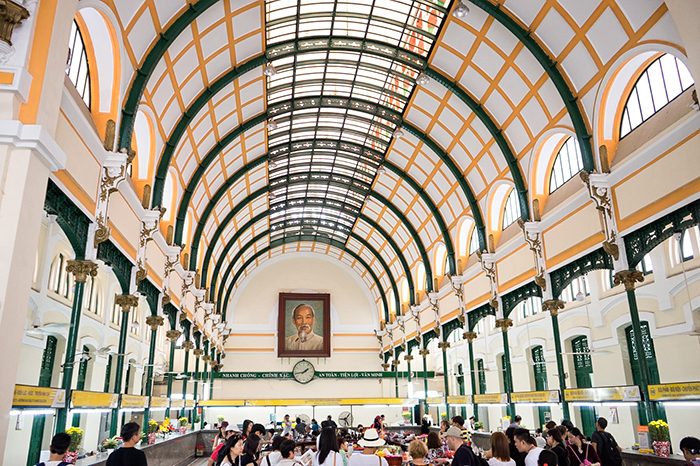 Inside, you’ll find beautiful tiled floors and walls adorned with two large painted maps of French Indochina: the “telegraphic lines of South Vietnam and Cambodia” and “Saigon and its Surroundings”. Telephone booths line the walls (with people actually using them), and the place is buzzing with activity — mostly with tourists milling about and buying souvenirs, but also with locals actually trying to accomplish regular postal errands. 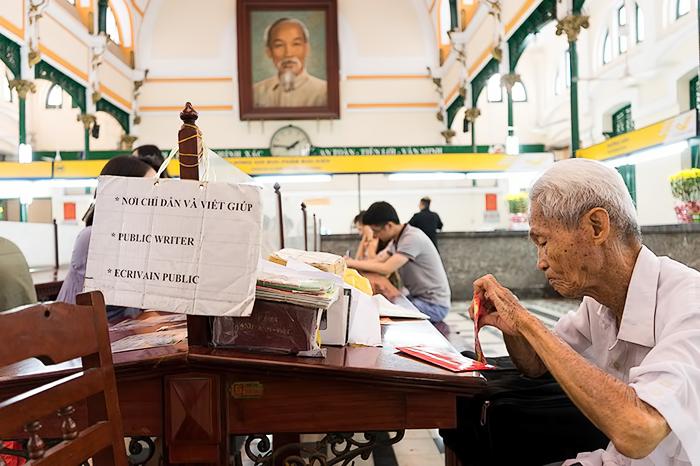 We saw an old man seated at one of the post office’s desks, with a sign that said “Public Letter Writer”. He looked so cool, we couldn’t resist taking his picture, and would later learn that he’s achieved a certain fame in Saigon. 77-year-old Duong Van Ngo is the city’s last remaining Public Letter Writer; a profession that was once in high demand. Saigon has long been a cosmopolitan city, and the multi-lingual Mr. Ngo helps bridge the communication gaps between the Vietnamese and their French and English employers, colleagues or lovers. 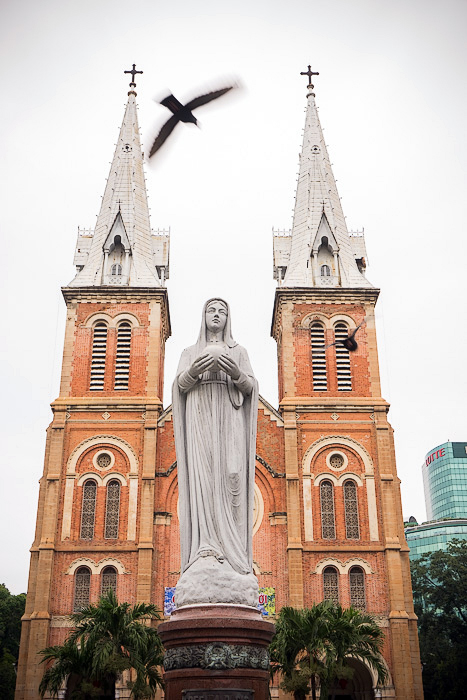 Across the street, the Notre Dame is another impressive building, which looks like it was airlifted in its entirety from France to Saigon. In fact, it might as well have been; all of the materials used in its construction were imported from France. The cathedral was consecrated in 1880, and is still in use (7% of Vietnam is Catholic).

The fact of the Notre Dame’s existence, and the weirdness of seeing a big European church in the middle of Saigon, is actually more interesting than the cathedral itself. Visitors are kept to the back; unable to explore at our leisure, we only spent a few minutes inside. 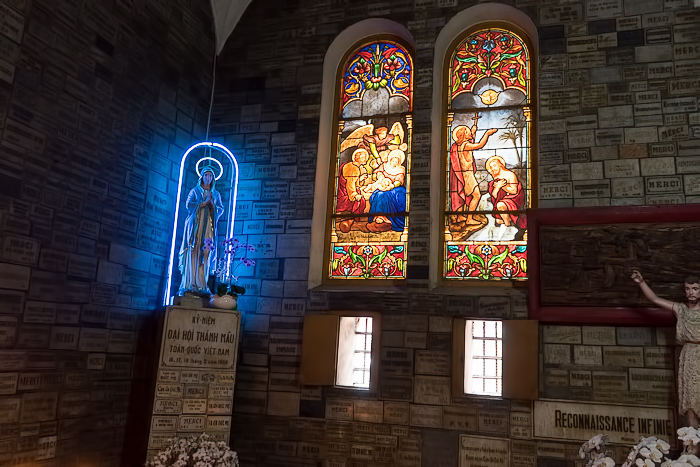 In 2005, the cathedral was in the news because the statue of the Madonna in its plaza was supposedly weeping. Jürgen and I are skeptical of such things (to put it mildly), but our views certainly aren’t shared by everyone. Although it wasn’t ever verified as a miracle by the Vatican, thousands of true believers flocked to the plaza, forcing authorities to stop traffic around the cathedral.

Both the Post Office and the Notre Dame are free and quick to visit, and they’re so central, you’d almost have to be trying to avoid them. Definitely worth poking your head in, to see some magnificent vestiges of the French occupation of Indochina. 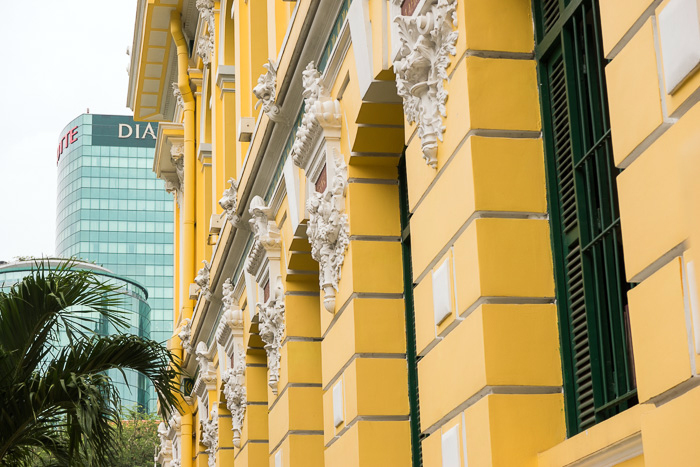 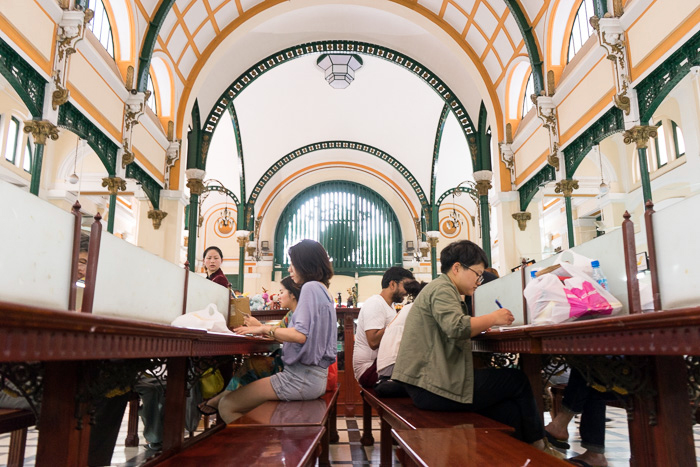 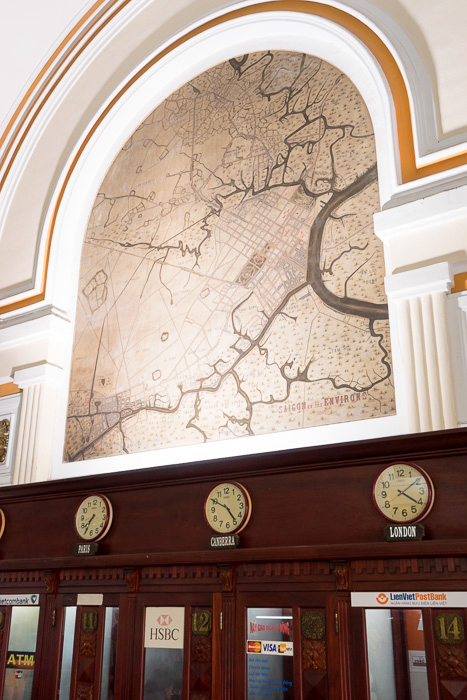 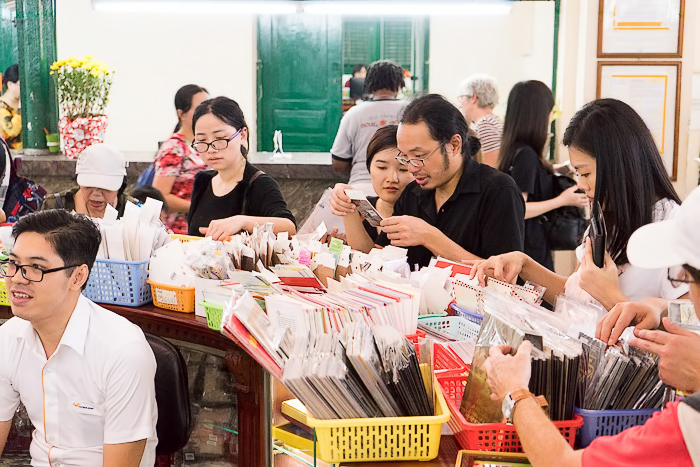 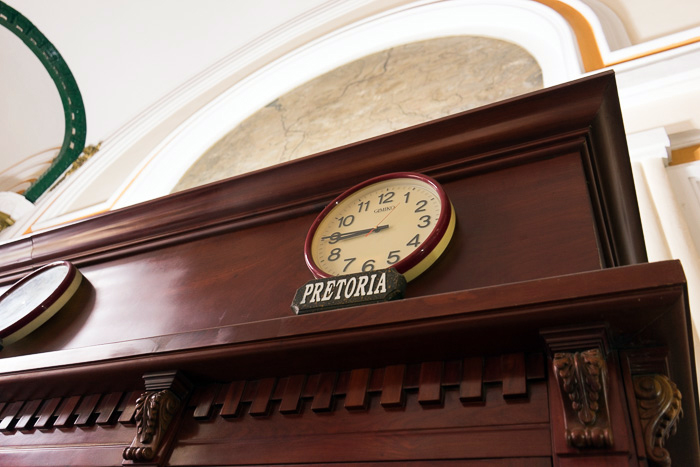 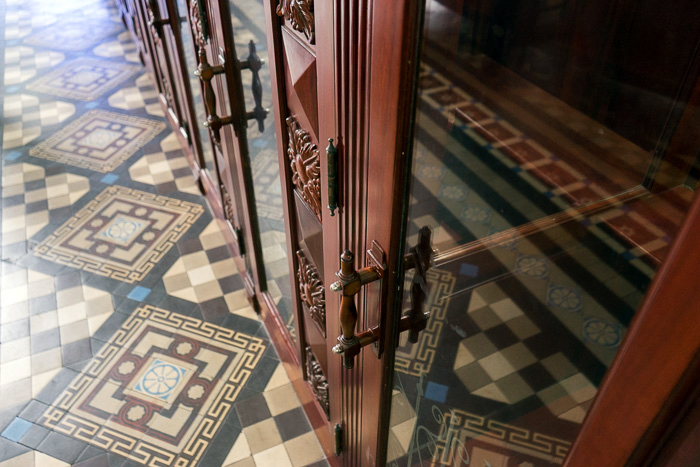 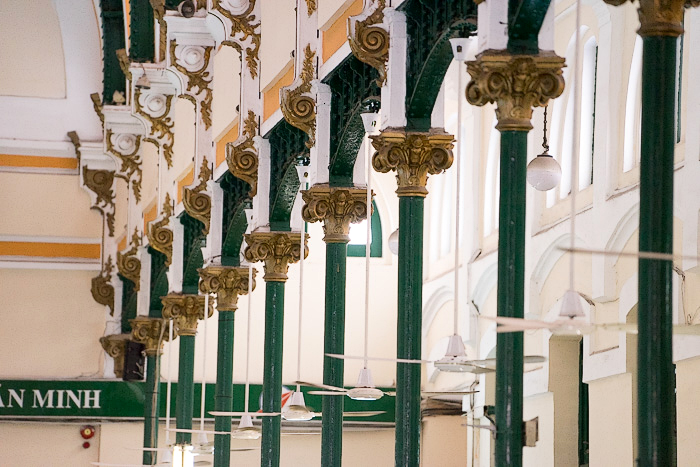 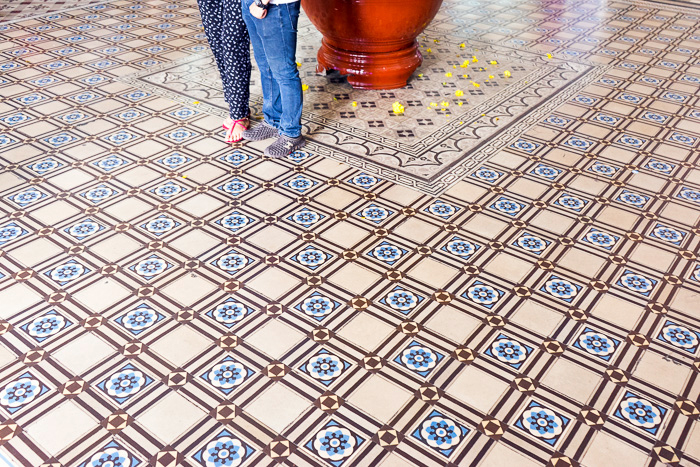 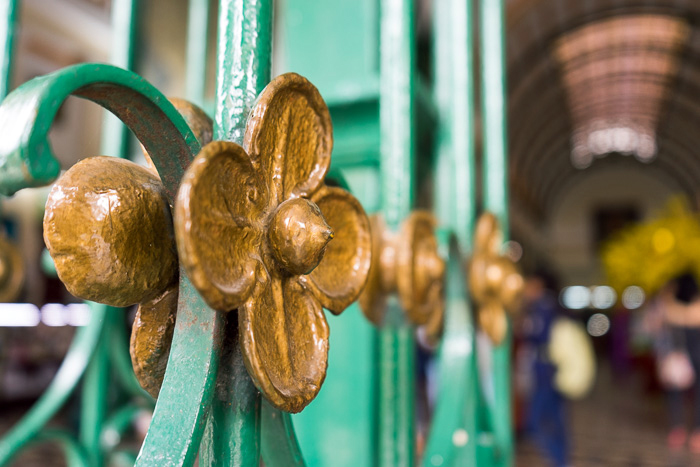 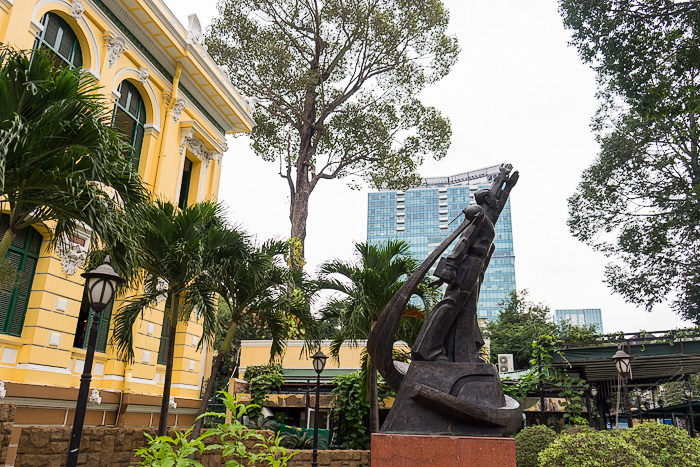 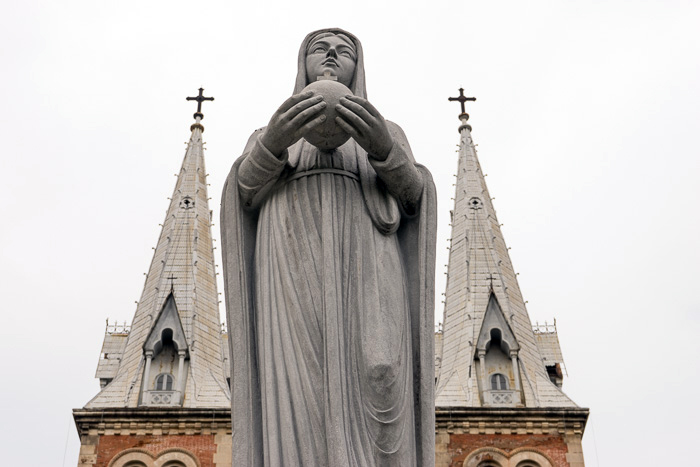 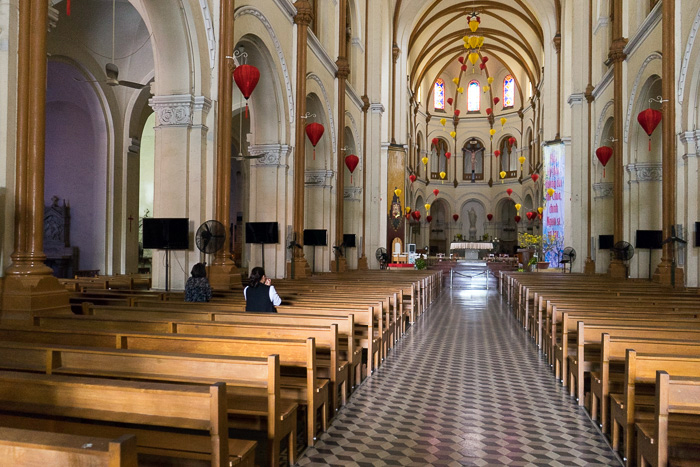 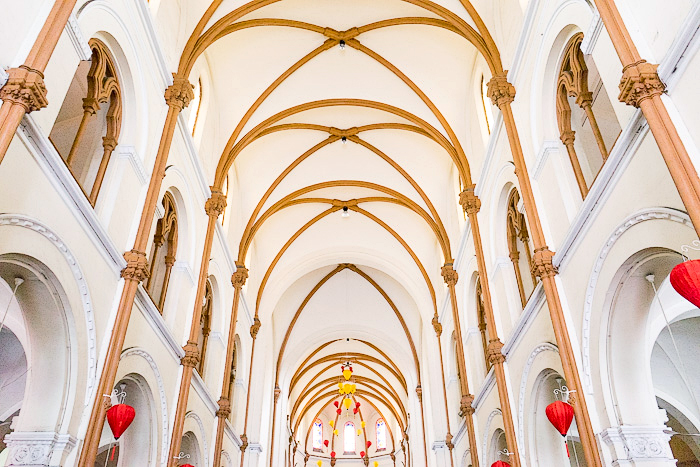 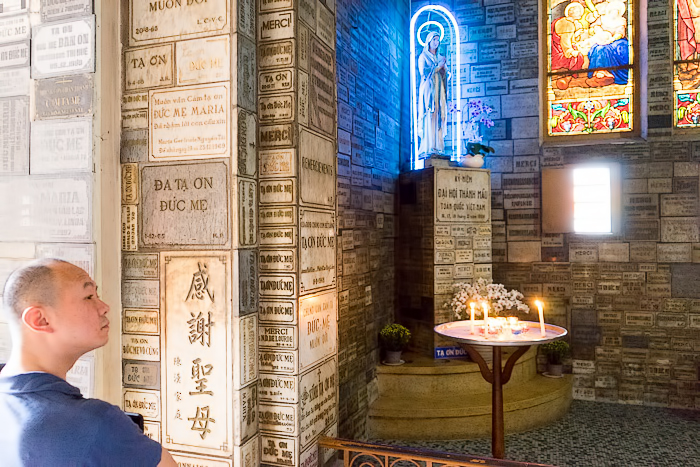 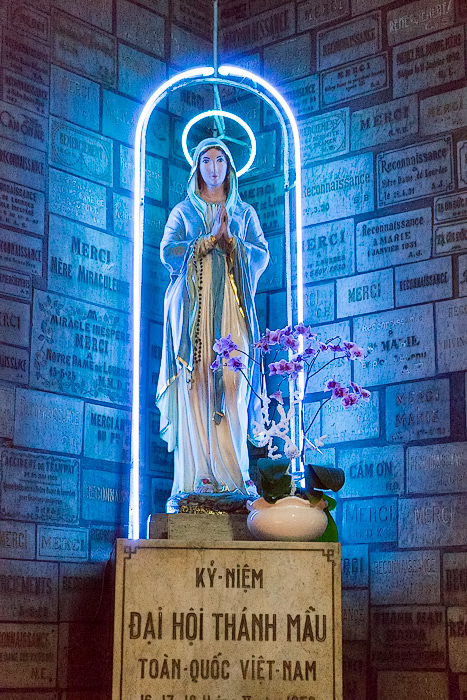 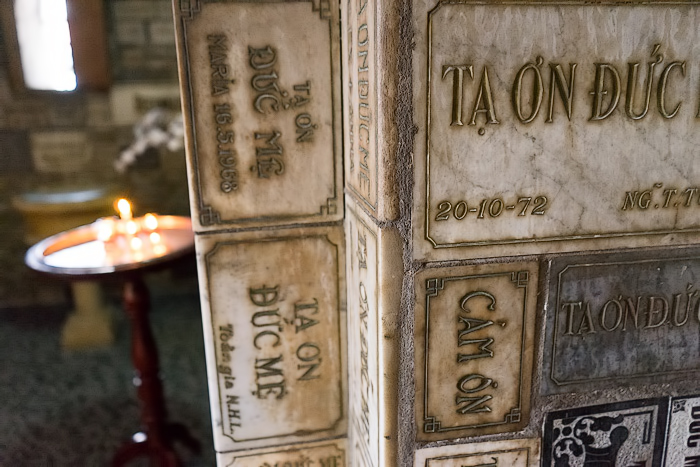 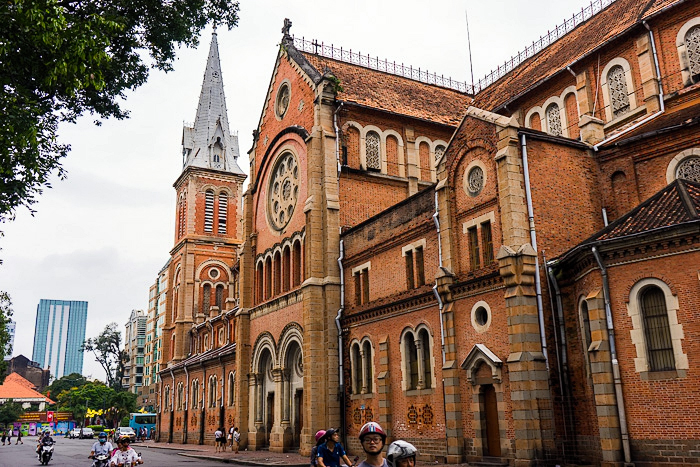 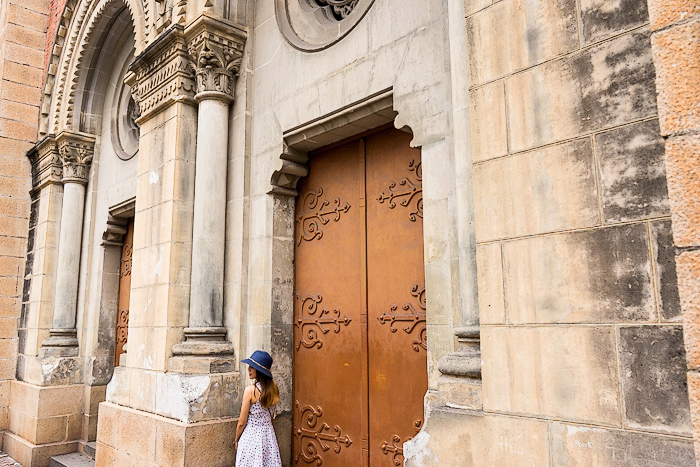 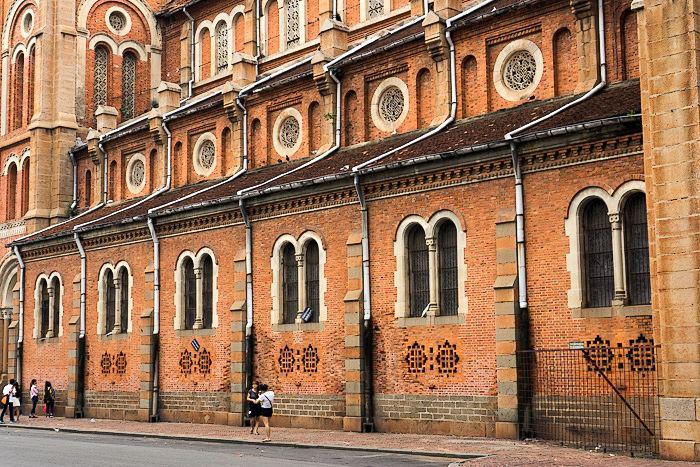 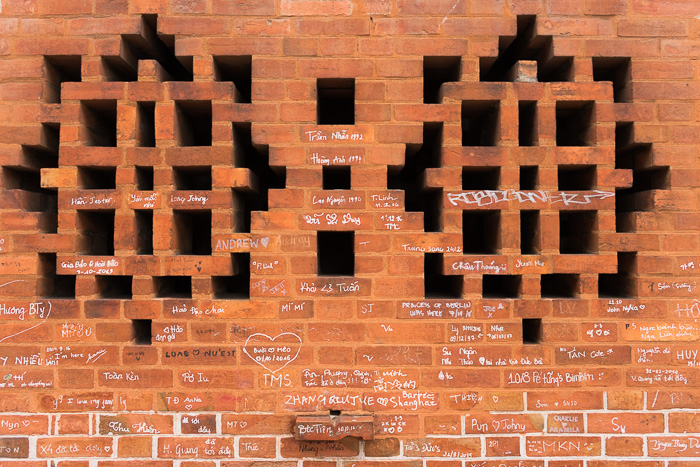 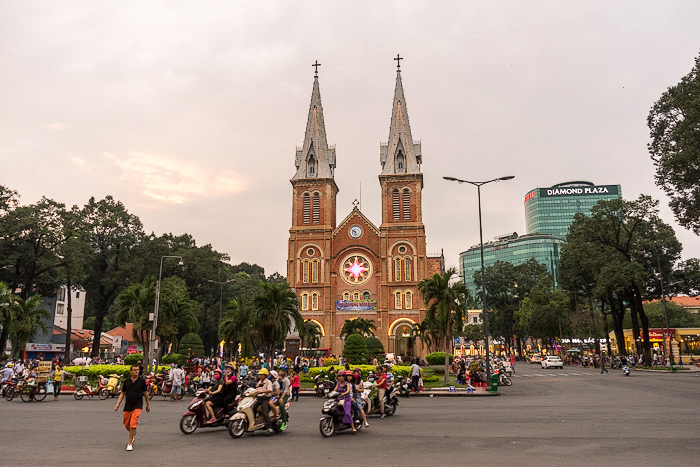 A Walk Along the Thị Nghè Canal

A Secret Weapon Cellar in District 3